Social media based horror with a Faustian twist… Bugger! did I just spoil the film in the first sentence? …Or did I?

It’s true, the advent of mobile phones & the internet changed the way horror films conduct themselves. There is only so many ways a person can be in a situation where their phone doesn’t work and not in continuous contact with society. So what if that’s exactly what you don’t want? Well that’s an ideal way to create a new type of horror, not with otherworldly demons or even psychopathic murderers, but the people you have to interact with in your everyday life.

This is how “Devils Domain” begins. Lisa is an outcast within her social group, she’s a self harming, bulimic lesbian who tried it on with her BFF and got rebuffed in a hard way. Her peers at school are unsympathetic to her issues and take it upon themselves to make her commit suicide. They enlist another so called friend to set up cameras around her bedroom, to witness her binge eat, purge, masturbate and then publish the entire thing online. This leads to the entire school knowing how messed up she is and everybody turning against her. Somewhere in all of this high school drama she receives a note asking if she’d like them all dead… Well she would wouldn’t she? So “yes” is ticked.

Enter Destiny! A new best friend who starts talking to Lisa online whilst sifting through the meme’s being posted on her generic social media page. She’s a wet dream come to life who seems to know all the answers and promises to help Lisa thorough her troubles. This is where a contemporary horror film about the evils of social media and high school morphs into a schlocky horror show filled with blood, prosthetics, gore, sex & funky lighting, as one by one her tormentors get their just desserts.

The film starts well, even as someone who grew up in a pre internet era I know the hell people go through online and how that kind of pressure can exacerbate a pre existing issue, Eating disorders & self harm go hand in hand with depression and suicide isn’t a million miles away if left unchecked. The idea the kids want her to die and are gleefully watching her unravel is a great basis for a horror film. Madi Vodane (Lisa) does an excellent job with what she’s given here and plays a character that feels out of place in the comically bad pink &purple lit demon realm she’s sucked into. 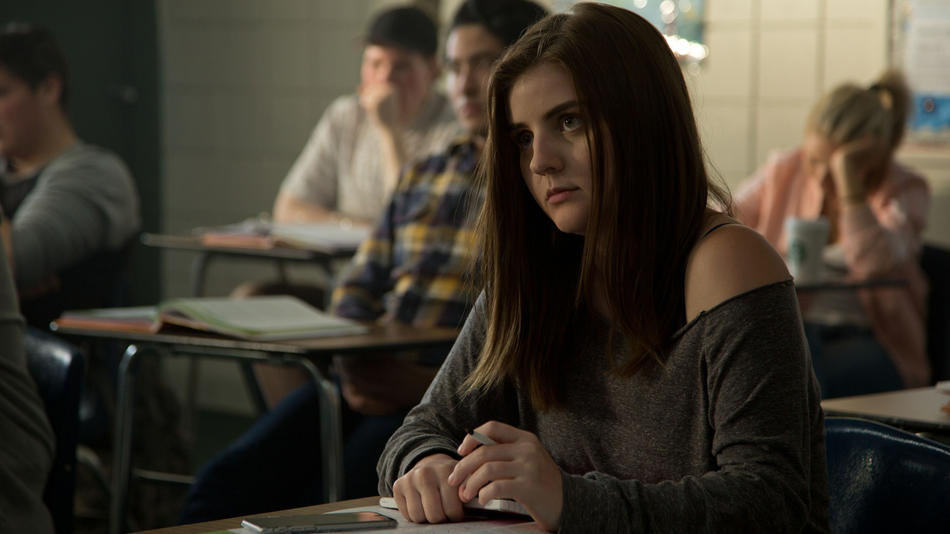 Madi Vodane “Lisa” doing well with the material in the more promising part of the film. She’s the outcast because she’s weird and.. ugly?

It’s when we’re introduced to Destiny the film goes downhill fast. If the film stayed away from the “deal with the devil” story altogether there may have been a decent story here. Her relationship with her parents especially her step dad (Michael Madsen) should have led to something, it’s this relationship which made it feel like the script during their scenes was from an entirely different movie altogether. It’s a film where you expect a twist and it simply doesn’t have one.

I actually had pretty high hopes after the first few minutes of Devils Domain, it looked like they were going to do something interesting. As soon as the first generic blonde bully girl pleads “Don’t hurt me” after having a chainsaw plunged into her chest however it all went out the window.

Get’s chainsawed through the chest THEN ask’s them not to hurt her. The fodder in this aren’t exactly bright or memorable.

Also Onyx are in this… For 10 seconds.